Fun with font could have been the title of this post. My latest creations are two typeface portraits; one of Amy Winehouse and a self portrait. These are for my Typography class and were supposed to be done in Adobe Illustrator, black only, on a 10″ x 7″ art board. We had to pick a famous person and do a self portrait.

To start this project I began by searching for tutorials in YouTube on doing typeface portraits. Only one tutorial showed up in Illustrator, the rest were done in Photoshop. Since I’m learning both programs, and I thought the Photoshop creations had the effects I wanted, that’s what I went with for Amy Winehouse’s portrait. I used two fonts; Cooper Std Black for the shadows and Corbel Regular for the mid-tones. Learning the clipping paths took a few try’s, but finally managed it. I used the lyrics to her song Rehab, from the album Back to Black. I think it came out nice, just not in Illustrator. 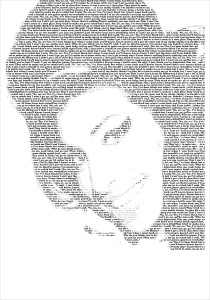 For my self portrait, which I knew had to be done in Illustrator, I tried using the same principles that I used in Photoshop. Frist I picked out three fonts; Cooper Std Black for shadows, Constantia Regular for mid-tones, and Corbel Regular for highlights. Created an layer with a rectangle filled with each font of the correct size, 7″ x 10′. I did adjust a few effects for each font, kerning and tracking, to get the right shade. Then so I could edit, I changed the font to outlines. Using the lasso tool I began deleting what I didn’t want and leaving what I did. This sounds easy but you have to think backwards. Instead of selecting the dark areas for the shadows layer, you have to pick everything else. I’m learning how to use negative space and I think this was a good exercise for that. 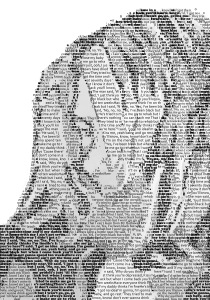 I used Amy Winehouse’s song lyrics for the words because I already had them ready to use. I think the Photoshop effects look more professional, but hopefully the Illustrator portrait will get a passing grade. I really don’t want to do it over.